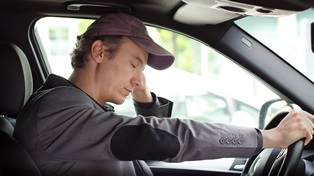 Drowsy driving is a leading cause of car and truck accidents in the United States, according to the National Highway Traffic Safety Administration (NHTSA).

Commercial truck drivers and others who spend long periods of time on the road are particularly susceptible to participating in this unsafe driving behavior.

Driving while sleepy can be dangerous for any motorist, but when the driver of an up to 80,000 pound commercial truck is too tired to focus or falls asleep at the wheel, the resulting accidents and injuries can be catastrophic.

In 2017, the Ford Motor Company developed a high-tech trucker cap to help combat the threat fatigued commercial truck drivers pose to public safety. Though the cap is still just a prototype, the technology behind it could potentially save a lot of lives by helping large vehicle operators prevent drowsy driving crashes.

Driving while sleepy may not sound serious, but research shows it can be just as impairing as drinking and driving. Too little sleep slows reaction times and makes it hard for drivers to focus on the road. Even missing just one or two hours of sleep can increase a commercial driver's risk of being involved in an accident.

Ford and GTB researchers mapped drivers' head motions to identify movements associated with drowsiness and fatigue. They then equipped a trucker cap with sensors, as well as a built-in accelerometer and gyroscope, enabling it to recognize those dangerous, fatigue-related head movements and alert the driver. The Ford SafeCap can vibrate, sound an alarm, or use flashing lights to get the sleepy driver's attention.

The anti-drowsy driving cap is currently in the testing, patenting, and certification stage. It's unclear when or if Ford plans to actually manufacture the SafeCap for the U.S. market.

While technological advances like the Ford SafeCap could prevent future truck accidents, they don't do much for individuals who were already hurt in crashes caused by fatigued commercial drivers.

If you were injured in such an accident, the legal team with McGartland Law Firm can help you explore your legal options and fight for whatever compensation you may deserve. Contact us today to schedule an appointment for a free case analysis.