Study Offers Clues To How PPIs Damage Arteries Over Time

Previous research into the efficacy and safety of acid-reducing proton pump inhibitors (PPIs) suggested a link between long-term use and a myriad of serious health problems, including artery damage and cardiovascular disease.

However, until recently, researchers weren't able to explain how these drugs might inflict this damage. A 2016 study conducted by Dr. John Cooke, chair of cardiovascular sciences at the Houston Methodist Research Institute, and published in the May 10 issue of Circulation Research brought doctors and scientists one step closer to solving this mystery by providing valuable insight into how cells respond when exposed to PPIs over long periods.

For the study, Dr. Cooke and his team of researchers cultured endothelial cells, like those that line the walls of blood vessels, in a laboratory setting and exposed them to standard patient doses of the popular PPI drug, Nexium® (esomeprazole) for an extended duration. What they found was concerning.

Endothelial cells facilitate good blood flow and help prevent artery blockages by producing substances that both relax the blood vessel and give its walls a slippery coating that discourages blood clots and plaque from sticking. However, long-term exposure to Nexium interfered with the ability of the cell's lysosomes to produce the acid necessary to clear the cell of waste. As waste products built up inside the cell, it aged quickly and prematurely, taking on a “fried egg” appearance and losing the ability to divide into new cells.

The aged and waste-burden endothelial cells were less effective at protecting the blood vessel. Instead of slippery cell walls that encourage plaque and blood clots to slide on by, these cells had gummy walls that allowed things to stick—providing a plausible explanation for the link between long-term PPI use and health problems such as heart attacks and cardiovascular disease.

Though the study focused solely on AstraZeneca's Nexium, it has profound implications for the entire class of PPI medications. 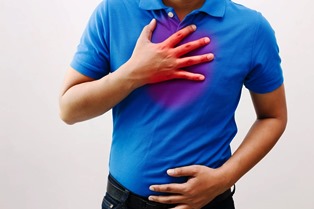 While this makes for an effective control for peptic-acid illnesses, Dr. Cooke's findings suggest that these medications may have the unintended consequence of interfering with acid-producing cells in other parts of the body, including the blood vessels.

This isn't the first time PPIs have been associated with negative health outcomes. Other studies suggest links between PPIs and serious complications such as an increased risk for hip, spine, and wrist fractures; dementia, and chronic kidney disease and renal failure.

FDA Guidelines for PPI Use

The U.S. Food and Drug Administration (FDA) acknowledged some of the risks related to the long-term use of PPIs and offered recommendations limiting their use to no more than three 14-day cycles in a single year. Unfortunately, many patients and doctors have failed to heed the FDA's guidelines, and many patients continue to take PPI medications for months or even years at a time without taking a break.

Are You Worried About the Consequences of Taking PPIs?

While PPI drugs are quite effective at controlling gastric acid and can even be life-saving for some patients, they're not for everyone. Many doctors speculate that a great many patients who are currently taking PPIs would do just as well on less-dangerous H2 blockers such as Zantac® (ranitidine).

Patients who are worried about talking PPIs should talk to their doctor about alternate treatments, including dietary and lifestyle changes.

Did You Experience Serious PPI Side Effects or Complications?

If you suffered PPI side effects such as broken bones; or were diagnosed with cardiovascular disease, dementia, or kidney disease or failure after taking a PPI medication for an extended period of time, you may be eligible to file a dangerous drugs lawsuit and pursue compensation from the manufacturer. Contact McGartland Law today for a free initial consultation to discuss your potential PPI lawsuit.