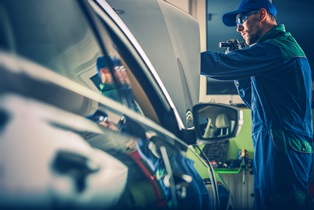 Recalls were issued for nearly 53,000,000 vehicles in 2016, making it a record-breaking year, but not in the way many automakers might have hoped. Fortunately for automakers and consumers alike, safety-related auto recalls decreased significantly in 2017, with just 28,146,661 vehicle recalls issued. Problems with airbags continue to drive recalls, while fire risks, faulty door latches, and engine defects also triggered vehicle recalls in 2017.Read on to learn more about the biggest auto recalls in 2017, as well as what you can do if you were injured in an accident caused by a faulty vehicle.

In October 2017, the Ford Motor Co. issued a recall for 1.3 million 2015 through 2017 model year F-150 pickup trucks and 2017 Super Duty pickup trucks due to faulty door latches that may not open or close properly, or may open while the vehicle is in motion.

In a move that will cost Ford $267 million, the company announced it would install a water shield in the affected pickups to solve the door latch issue.

In July 2017, Fiat Chrysler announced two large recalls, affecting a total of 1.3 million vehicles. The automaker recalled 538,000 2011 through 2015 model year Dodge Journey crossover SUVs, as well as 233,000 Fiat Fremont SUVs, due to a wire chaffing issue that could lead to a short circuit, resulting in accidental airbag deployment. Fiat Chrysler will replace the wiring and add protective covering to prevent chaffing. The issue has been linked to several minor injuries.

Fiat Chrysler also recalled more than 565,000 other vehicles due to fire risks associated with faulty alternators. The diodes on these alternators were prone to premature wear that could lead to smoke, fire, engine stalls, and antilock braking system malfunctions. Replacing the alternator will solve this issue, which has been linked to at least two accidents.

In April 2017, Hyundai and Kia recalled approximately 1.5 million vehicles sold in the United States over a manufacturing defect linked to older Theta II four-cylinder engines. The engines were at risk of stalling due to metal debris in the crankshaft. Hyundai and Kia will offer replacement engines in cases where the defect has caused significant damage.

The following vehicles, produced prior to model year 2014, may be affected:

In July 2017, Honda recalled approximately 1.15 million Accords from the 2013 through 2016 model years due to faulty battery sensors which could potentially short out and cause a fire. The sensors are especially at risk of shorting during inclement weather, as they're not adequately sealed against moisture. Honda dealerships will repair or replace the sensors at no cost.

Japanese airbag manufacturer Takata has recalled more than 37 million airbags due to faulty inflators that have been linked to nearly a dozen deaths and more than 180 injuries. The Takata airbag recalls continued in 2017 and affected vehicle brands include:

Recalled vehicles can pose a significant threat to the safety of America's roads. If you were injured in an accident caused by a defective vehicle, you may be entitled to compensation for medical expenses, property damages, lost wages, pain and suffering, and additional damages. An experienced and knowledgeable car accident attorney can review your case to determine any and all potential avenues of compensation.

Contact McGartland Law Firm today to schedule an appointment for a free initial case consultation. Our award-winning legal team can help you pursue the fair settlement you need and deserve after being seriously injured in an accident.