What are the signs of a defective knee implant?

Knee replacement implants are touted as being able to offer a reduction in pain, an improved range of motion, and increased mobility for patients suffering from debilitating conditions such as rheumatoid arthritis, osteoarthritis, osteonecrosis, and post-traumatic degenerative problems. 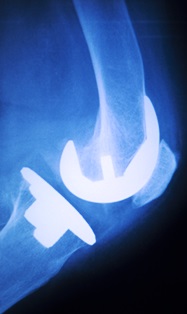 ee replacement surgical procedures are extremely popular, with more than 600,000 performed each year in the United States, according to the Centers for Disease Control and Prevention (CDC). Unfortunately, for some patients who undergo total knee replacements, the promise of an end to chronic pain and a return to a more active lifestyle just doesn't hold true.

Recently, patients implanted with knee replacement devices from manufacturers such as Zimmer Biomet, Stryker Corporation, Wright Medical Group, and others reported serious complications and unusually high rates of failure. While research indicates implants last for approximately 20 years for 80-to-90 percent of total knee replacement patients, others report problems with their prosthetic joints as soon as a few months after surgery.

If you've had total knee replacement surgery, here's what you need to know.

Discomfort and swelling that occurs immediately after a total knee replacement—and up to three months later—can be completely normal. However, pain and discomfort that appears out of nowhere or increases in intensity may be caused by something more insidious. Watch for the following signs and symptoms, which could indicate that knee replacement implants are defective or have failed:

What to Do If You Suspect Your Knee Implant Is Defective

Patients who notice signs and symptoms that could potentially indicate a defective knee replacement implant should contact their doctor right away. It's important to assess the extent of the damage as soon as possible. To that end, doctors may order a battery of diagnostic tests, such as X-rays, an MRI, a CT scan and lab tests to screen for infection.

If the knee replacement failure resulted in significant medical bills, pain and suffering, and other losses, the patient may also benefit from seeking the advice of a knowledgeable personal injury attorney with experience handling defective medical device cases.

Are You Suffering From a Defective Knee Implant?

McGartland Law Firm can help those who have suffered complications due to a defective knee replacement device such as the Exactech Optetrak® knee replacement implants fight for compensation for medical expenses, pain and suffering, and other economic and non-economic damages.