Dangers of Driving While Emotional

Most people are aware of the dangers associated with driving while drunk or distracted, but there's another concern we don't readily consider.

A recent study conducted by researchers at the Virginia Tech Transportation Institute (VTTI) and published in the Proceedings of the National Academy of Sciences of the United States of America suggests that driving while experiencing strong emotions can be just as impairing. The study indicates drivers who get behind the wheel while crying or visibly sad, angry, agitated, and even happily excited are 10 times more likely to be involved in an accident.

Read on to learn more about the dangers of emotional driving and what you can do if you were injured in an accident caused by a driver overcome with emotion.

In recent years, factors such as driver error, impairment, fatigue, and distraction are estimated to have played a role in up to 94 percent of motor vehicle accidents in the United States. In an effort to better understand what causes these types of accidents, VTTI researchers collected crash data from more than 3,500 drivers spanning a three-year period.

During this time, researchers confirmed more than 1,600 crash incidents ranging in severity from minor accidents—such as hitting a curb—to serious accidents reported to law enforcement. Of these 1,600 incidents, 905 were significant enough to cause injuries or property damage, and approximately 90 percent included the factors researchers were specifically looking for: driver error, impairment, fatigue, and distraction. 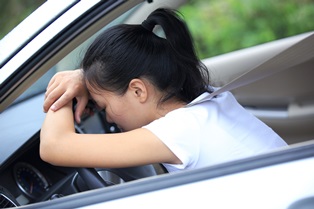 What the researchers weren't necessarily expecting the data to show was the extent to which strong emotions can impact driving performance. Drivers experiencing strong, visible emotions had a tenfold increase in crash risk compared to the other drivers observed for the study.

Tips for Handling Strong Emotions on the Road

It's unrealistic to expect drivers not to experience any type of emotion while behind the wheel. However, because some level of emotion is inevitable, it's important for drivers to learn how to handle strong emotions when they occur. Being aware of your emotions is essential—and taking steps to mitigate intense emotions before they have a noticeable effect on your physical and mental state can literally be lifesaving.

These steps may include:

Road rage is one of the most common and dangerous forms of emotional driving. Some statistics suggest that most people will be a victim—or a perpetrator—of aggressive driving behavior at least once in their lifetime. Because road rage behaviors can get out of hand quickly and have devastating consequences, it's important to get them under control as soon as possible. One way to do this is to remember that most upsetting behavior that comes from other drivers isn't directed at you personally.

If you were the one who initiated the aggressive driving behavior, here are a few things you can do to express remorse and prevent the situation from escalating:

Do You Need a Car Accident Attorney?

If you were injured in an accident caused by a negligent driver who was distracted by strong emotions, you may be entitled to compensation. Contact McGartland Law Firm today to schedule an appointment to discuss the details of your case. Our firm offers free, no-obligation initial consultations.