The Dangers of Driving While Distracted

Driving is a task that requires the full attention of every motorist. When drivers try to split their attention between the road and distractions inside or outside of the vehicle, accidents with serious injuries and even fatalities can be the result.

In fact, according to the National Highway Traffic Safety Administration, more than 391,000 people were injured in crashes involving distracted drivers in just 2015. Additionally, 3,477 people lost their lives in distracted driving accidents that year. 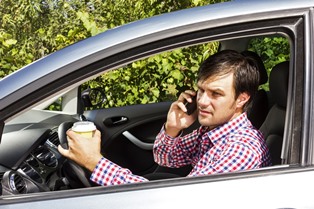 Distracted driving is a serious problem, but not everyone realizes its magnitude.

Many people don't consider talking on a cell phone or using a navigational device to be as dangerous as speeding or driving under the influence, even though it's included among the leading causes of death for motorists.

Many motorists are less concerned with distracted driving dangers than they perhaps should be because they overestimate their ability to multitask. What these motorists may not realize is that multitasking itself is a misconception. The human brain doesn't handle multiple tasks at once, but rather switches quickly from one task to another. If a motorist's focus is on replying to a text, his or her brain isn't focused on driving and, under those conditions, it's easy to see how an accident could result.

There may be more kinds of distractions than vehicles on the road. To keep things simple, the Centers for Disease Control and Prevention group on-the-road distractions into three main categories: visual, manual, and cognitive.

Many distracted driving behaviors fit in more than one category. For example, searching for something in the vehicle is a distraction that could be considered both visual and manual. Activities that combine more than one type of distraction are particularly hazardous. That's why many traffic safety experts consider texting while driving to be one of the most dangerous distracted driving behaviors. It combines all three types of distractions, requiring drivers to take their eyes off the road, their hands off the wheel, and their mental focus away from driving safely.

Some people balk at the idea that using a cell phone while driving is dangerous: after all, isn't it just as risky as talking to a passenger? No, according to a 2008 study conducted by researchers at the University of Utah. The study determined that passengers are less distracting than someone on the other end of a cell phone because they can judge the flow of traffic and pause conversation, if necessary, or point out traffic hazards that the driver might not see.

Do You Need a Car Accident Attorney?

Were you injured in an accident? If the driver who caused your accident was distracted at the time of the crash, he may be liable for your injuries as well as other damages. The experienced attorneys with McGartland Law can help you fight for whatever financial recovery you deserve. Contact McGartland Law today to schedule an initial case consultation, free of charge.