Why Commercial Drivers With Sleep Apnea Can Cause Accidents

Truckers With Sleep Apnea May Cause Serious Accidents

Sleep apnea is a much-discussed topic in the trucking industry ever since 2002. A studysponsored by the Federal Motor Carrier Safety Administration (FMCSA) and the American Transportation Research Institute of the American Trucking Associations, and conducted by researchers at the University of Pennsylvania, found that 28 percent of commercial drivers suffer from mild to severe forms of the disorder.

However, in August 2017, under the direction of the Trump Administration, officials from the Federal Railroad Administration (FRA) and the FMCSA announced they would abandon plans to implement sleep apnea screenings for truck drivers as part of a wide-scale regulatory rollback. The decision has stunned some safety experts, who claim that no one benefits by having potentially unsafe commercial drivers sharing the road with the general public.

People injured in truck crashes caused by truckers with undiagnosed, untreated, or uncontrolled sleep apnea may be entitled to compensation. If you were hurt in such an accident, here's what you should know.

What Is Sleep Apnea? 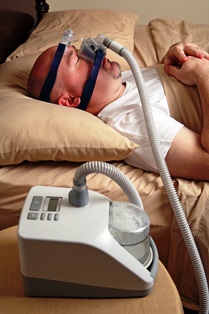 Sleep apnea is a common disorder that affects a person's ability to breathe effectively while sleeping. The disorder may make it difficult for someone to get a productive breath or cause them to briefly stop breathing. These pauses in breathing can last 10 seconds or longer and, in some cases, may occur hundreds of times each night. Struggling to breathe may partially rouse the person from sleep, preventing them from achieving a deep sleep or feeling rested in the morning.

If untreated, sleep apnea can affect trucker's driving performance by decreasing daytime alertness, making it hard to focus or stay awake, and slowing reaction times. Once the condition is diagnosed, the solution is often the use of a CPAP machine to help an individual breathe while sleeping.

A number of factors can indicate an increased risk of developing sleep apnea, including:

Requirements for Truckers With Sleep Apnea and Their Employers

Having sleep apnea doesn't necessarily preclude truckers from driving. As long as their sleep apnea is controlled—as determined by state or federal medical standards and a licensed doctor—commercial drivers can be declared medically-qualified to drive and continue working.

Drivers who fail to get their sleep apnea under control, or trucking companies that don't take reasonably steps to ensure the medical fitness of their employees, may be found in violation of FMCSA regulations.

Do You Need a Truck Accident Attorney?

If you were harmed in a truck accident caused by fatigue related to a driver's uncontrolled sleep apnea, you may be entitled to compensation for injuries and other damages. Contact McGartland Law Firm today to schedule a no-cost, no-obligation initial consultation to speak to a legal professional about your case.